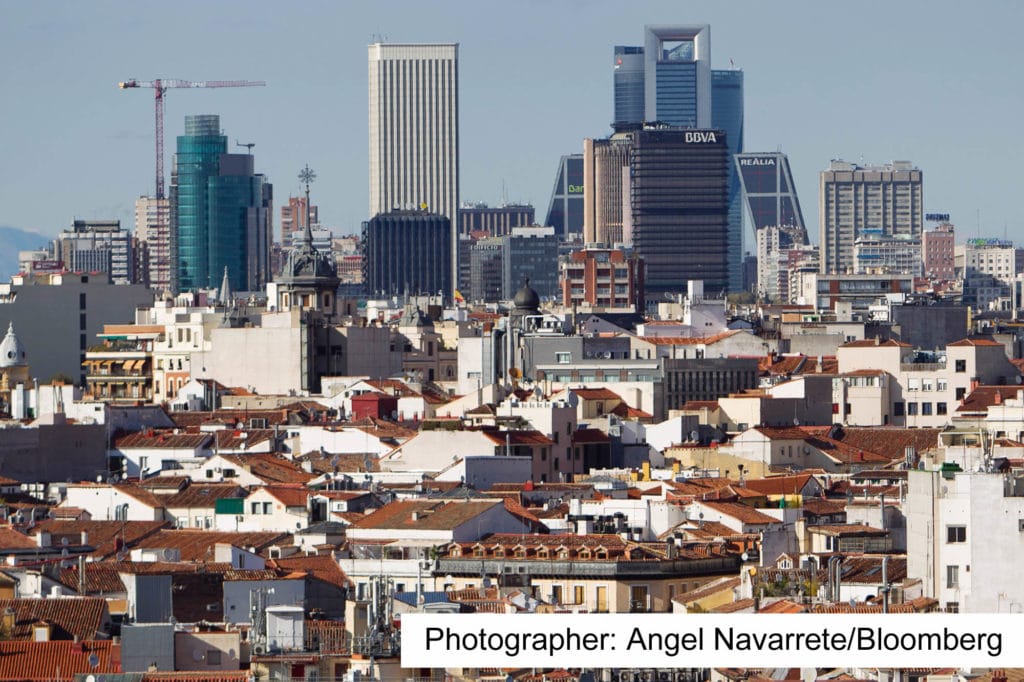 For Venezuelan exiles with money, Madrid has become a home away from home.

Venezuelans are increasingly turning to the Spanish capital as a place to invest as their home country falls further into economic chaos and the political mood turns more sour in U.S. havens such as Miami. The number of Venezuelans arriving in Spain rose more than 50 percent in 2015, according to the Spanish statistics office, the biggest increase after immigrants from the Ukraine.

With its shared language, stable politics and a property market that’s still recovering from a six-year crash, Spain holds many attractions for wealthy Venezuelans seeking a shield their assets from economic disorder in their home country. The number of properties sold to Venezuelan nationals jumped 17 percent in 2016 according to Spain’s property register.

“The worse things get in Venezuela, the more they buy in Madrid,” said Alvaro Gonzalez de la Hoz, director general at the real estate unit of Petrus Grupo Inmobiliario, which specializes in selling and renting high-end properties in the upscale Madrid neighborhood of Salamanca. “They feel safe here, they like the quality of life, they speak the language — and they’re taking money out of Venezuela.”

Hit by sky-rocketing inflation and a surge in crime, Venezuela has descended into an economic pit.

While Venezuela’s central bank stopped publishing inflation data in December 2015, the International Monetary Fund argues the nation has entered a spiral of hyperinflation with price increases seen rising above 1,600 percent this year. Similarly, figures for domestic product haven’t been updated in more than a year, although the Washington-based institution estimates the Venezuelan economy contracted 10 percent last year, making it the world’s worst performer.

A political crisis which has seen President Nicolas Maduro holding on to power in defiance of mounting opposition is contributing to the economic collapse. Against that backdrop, food and energy shortages are common.

Meanwhile, Caracas-based Grupo Sambil has spent 60 million euros ($64.8 million) upgrading a shopping mall in Madrid they acquired in 2012 and plans further investments in Spain including in real estate, said Director General Alfredo Cohen in an interview. Venezuela’s late President Hugo Chavez expropriated a shopping mall in Caracas owned by the family in 2008, announcing the move on his weekly television show.

“The country is going through a political and economic crisis, so diversifying
our product, which has been very successful back home — in fact we are still
headquartered in Venezuela — is a good idea,” said Cohen. “We don’t just do shopping centers, we’re also a construction company and we have the cash to invest if we spot a good opportunity here in Madrid.”

For luxury real estate agents in Madrid, the crisis in Venezuela has yielded a business opportunity.

A luxury apartment around Madrid’s so-called golden mile of Serrano — filled with restaurants and high-end fashion stores — can go for upwards of 7,000 euros ($7,357) a square meter (650 euros per square foot). Venezuelan buyers can be prepared to pay much more than that to seal a deal on a property, Gonzalez de la Hoz said.

As part of efforts to revive its real estate market, Spain brought in a so-called golden visa program in 2013 to lure investment by wealthy foreigners.

The number of Venezuelans arriving to Spain has risen by more than 150 percent since 2013, jumping from roughly 7,000 annual arrivals to more than 19,000. While figures for last year are preliminary, they point to yet another record year with more than 10,000 Venezuelans coming to Spain in the first half of the year.

“For the most part, they want at least three bedrooms or more — over 200 square meters — and the price range is one to two million euros,” said Rod Jamieson, director at Lucas Fox’s Madrid division. “They want a gym, pool, a spa and security.”

For now, Spain looks like a paragon of stability after Mariano Rajoy sealed a second term as prime minister last year with pledges to keep tackling unemployment and stoking growth in the economy, which grew 3.2 percent last year. Even so, Rajoy doesn’t have a majority in parliament and may in theory be forced to hold new elections if he can’t pass key legislation such as his budget.

More Venezuelans may also be moving to Madrid as the political climate in the U.S. — a favorite destination for rich South Americans — has become more complex since the election of Donald Trump, said Alexandre Rangel Lattuf, chief executive officer at Grupo SIEspana, a Miami-based firm that offers advice to Venezuelans seeking to invest in Spain. By contrast, buying a house and investing in Spain gives them access to other European Union countries.

“Venezuelans are getting to grips with the idea that even if you want to move to Miami, like most Venezuelans do — it’s going to cost you more and it may not be possible after all,” said Grupo SIEspana’s Rangel Lattuf. “In Spain, you can buy a house and become a resident and after two years you can apply to become a citizen.”

This website uses cookies to improve your experience while you navigate through the website. Out of these, the cookies that are categorized as necessary are stored on your browser as they are essential for the working of basic functionalities of the website. We also use third-party cookies that help us analyze and understand how you use this website. These cookies will be stored in your browser only with your consent. You also have the option to opt-out of these cookies. But opting out of some of these cookies may affect your browsing experience.
Necessary Siempre activado
Necessary cookies are absolutely essential for the website to function properly. This category only includes cookies that ensures basic functionalities and security features of the website. These cookies do not store any personal information.
Non-necessary
Any cookies that may not be particularly necessary for the website to function and is used specifically to collect user personal data via analytics, ads, other embedded contents are termed as non-necessary cookies. It is mandatory to procure user consent prior to running these cookies on your website.
GUARDAR Y ACEPTAR